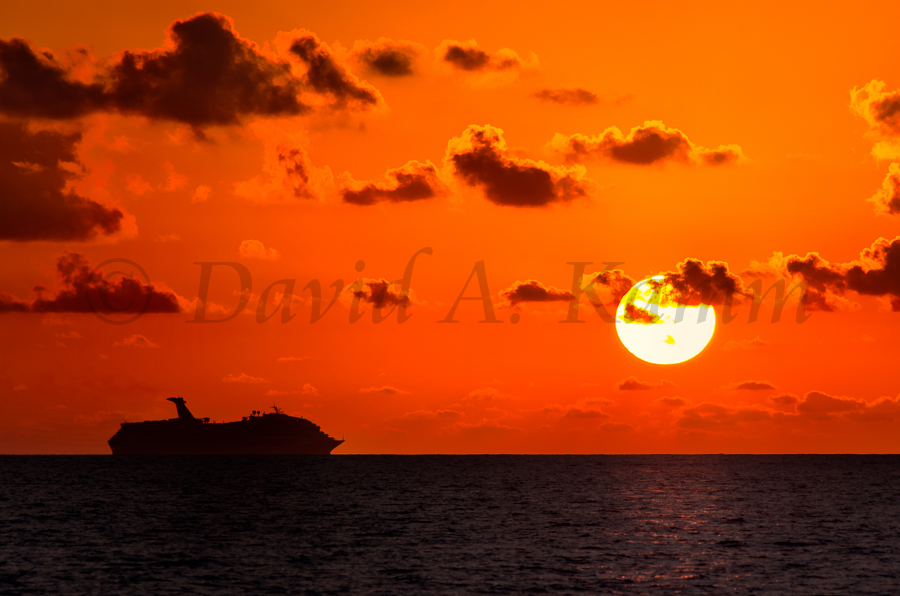 This photo was quite unexpected from the very start.  I shot the image below from a beach along the Riviera Maya region south of Cancun, Mexico, last Saturday, Feb. 9th, at daybreak.  It’s the now-infamous Carnival Triumph cruise ship, and in this scene it’s heading under its own power toward Cozumel.  This was fated to be the last good day for the passengers on that cruise.

The Rest of the Story

I like to go out before sunrise during our trips to see what good images I might be able to pick up.  I hate the early alarm clock, but I do it anyway and usually don’t regret it.

The Caribbean ‘seascape’ was pretty but also rather plain where we stayed during this trip, so I was really hoping for something else interesting to make the sunrise shots more compelling.  Usually for me that means at least a few good clouds to spice things up a bit.  This day was even better.

As luck would have it, the first morning I went out I saw a large ‘generic’ cruise ship heading toward where I knew the sun was going to soon poke up out of the sea.  ‘Great!’, I thought.  Now I just had to get into position, check my equipment settings and lens choice, and wait.

Overall I fired off maybe 30 or so images of this general scene with a telephoto zoom lens at various focal lengths.  Horizontal and vertical orientations, ship to the left and right of the rising sun, etc.  I had no idea which ship this was, nor did I care at the time.  The colors, clouds, sun, and ship silhouette made for a nice composition and I was determined to get something decent to work with.

I shot a number of handheld 5-shot HDR (‘high dynamic range’) image sequences with my Pentax K-5 DSLR.  The photo above is based on the midpoint exposure of one of those sequences.  And it was thanks to one of the more overexposed shots that I was later able to zoom in on my computer and see the ‘Carnival Triumph’ lettering on the side.

It wasn’t until we returned home earlier this week that we learned about the disaster aboard the Triumph, and the story was still unfolding as the rescue operation finally came to an end on dry land.  While looking at some images of the ship on CNN, I opened up Adobe Lightroom on my PC, zoomed into one of the brighter images I had taken as described above, and knew without a doubt that we had the Carnival Triumph in this shot.

In golf, the familiar saying is that you miss 100% of the putts that you hit too short.

In photography the equivalent would be that you miss 100% of the shots that you’re not there for.  In photojournalism the saying is just ‘f/8 and be there!’

So I’m glad I set and answered the early alarm clock on this day.  And yes, I did have the lens aperture set to f/8 for this shot.

By the way, I sort of apologize for the big fat watermark on this particular image.  I usually try to be pretty unobtrusive and subtle when adding my name to an image, but in this particular case I wanted the copyright statement to be much more obvious.  Thanks for your understanding!

This site uses Akismet to reduce spam. Learn how your comment data is processed.

Scroll back to top